Erectile Dysfunction (ED), is a repeated inability to achieve or keep an erection firm enough for sexual intercourse. The word impotence may also be used to describe other problems that interfere with sexual intercourse and reproduction, such as a lack of sexual desires and problems with ejaculation and orgasm but the term Erectile Dysfunction is more precise because it refers only to erection problems. Men with erection problems often retain other sexual functions. For example, they may have sexual desire and may still be able to have orgasms and ejaculate semen.

It is estimated that about thirty million men in the United States experience chronic erectile dysfunction. Studies show that about half of the men between the ages of 40 and 70 have ED to some degree. Until recently, there was only a little choice of treatment in cases of diminished erection or impotence. Fortunately, times have changed. Due to the fact that research has been successful over the years, men may now be treated for this problem. Possible therapies include medications, injections, sexual counseling and surgery. Most erection disorders are caused by a combination of physical and psychological problems. Urologists who have traditionally treated erectile dysfunction.

Trimix for Travel® Carry Kits™ (alprostadil, papaverine, phentolamine) is a unique alternative form of trimix for injection which does not have to be refrigerated. It consists of a powdered form of trimix and bacteriostatic water in separate vials.

At time of use, the bacteriostatic water reconstitutes the powdered trimix. The trimix returns to its liquid form and is injected as usual. TriMix for Travel® is made from the same ingredients as regular trimix only it requires “NO REFRIGERATION”.

TriMix for Travel® is well received by patients who formerly carried their trimix in ice packs. Active mobile patients can now more easily travel with their medicine and leave their ice packs home. 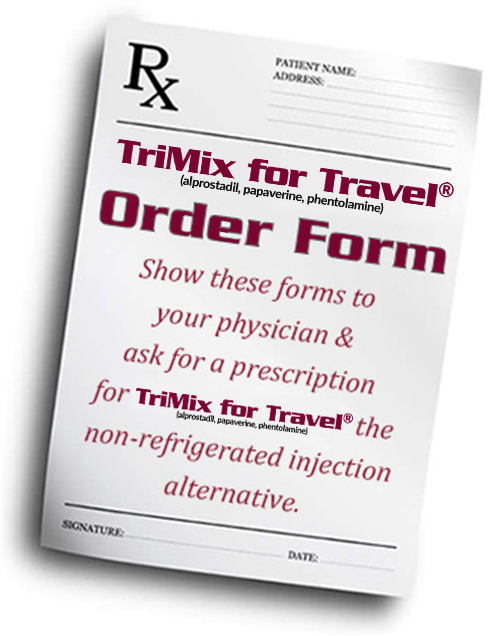